The Decameron: A Note from Our Founding Artistic Director 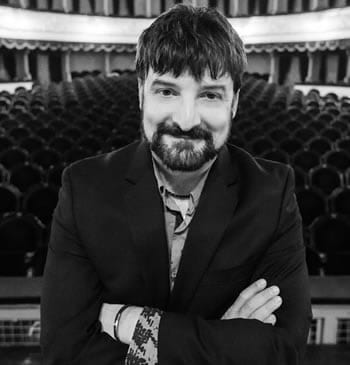 Today it feels like we are all mimes trapped in our invisible boxes, unable to get out and move the way we would normally move – this is exceptionally hard for a Physical Theater Company! We thought hard about what role our art, expression, and style could play during this pandemic and we hope we have provided audiences a window out of our current isolated environments. Inspired by Giovanni Boccaccio’s The Decameron, a massive collection of short stories told by a group of young people socially distancing together during a global pandemic.

I guess art sometimes can’t help but mirror life, can it?

Set during the infamous Black Death of 1347-51, Boccaccio’s landmark work features seven well-born Florentine ladies who convince three gentlemen of their acquaintance to escape with them to a villa in the Tuscan hills to wait out the plague. Over the course of ten days, the Florentines tell stories, beginning and ending each session with singing and dancing.

The stories themselves are an epic mix of tragedy and comedy (the highest of the high and the lowest of the low), featuring revenge, betrayal, violence, scheming, love, and loss. Each character, no matter how large or small, is living life to its fullest and feeling every emotion in its deepest and most intense form. In mid-14th century Italy, especially with the Black Death cutting across Europe, life was painfully short and every moment of it was precious.

But then as now, Boccaccio’s The Decameron remains one of the most original and life-affirming works in all of Western literature. No matter the sadness and upheaval taking place in the world, Boccaccio reminds us that life can and will go on, while demonstrating how vital it can be to take a pause and focus on “the little things”—on the simple pleasures that can come both from being together and from being apart. In writing ‘The Decameron’, Boccaccio did not invent a new genre; he crafted a work that is a genre on its own and a powerful testament to the quiet strength of the human spirit.

We hope you enjoy our adaptation of The Decameron, presented in the manner Boccaccio himself envisioned with each vignette told by a different storyteller. We’re especially pleased by the opportunity this gives both past and present Syneticons to be our directors and storytellers, particularly as we look towards our 20th Anniversary Season. With many of us spread across the country and around the globe, this is a great chance to come back together and begin introducing you to a new crop of directors, writers, and choreographers, each putting their own individual spin on Synetic’s unique style and aesthetic.

We’ll see you all at the theater again soon. In the meantime, please stay safe and healthy, and thank you for watching Synetic’s new  production of The Decameron.

— Paata Tsikurishvili, Founding Artistic Director and Mentor for The Decameron