by Mandi Lee
mentored by Victoria and Dallas Tolentino

“Put the Devil Back in Hell”
Alibech—on her journey to find God—experiences a sexual awakening.

Time is warped in quarantine: minutes stretch to hours or tick by in an instant.
A woman wrestles with isolation, like a boat lost at sea. 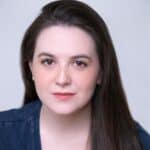 Mandi Lee is thrilled to be making her Synetic performance debut! While not on stage (or screen), Mandi is an arts administrator for Synetic Theater. She recently received her Master of Fine Arts in Acting from the University of Central Florida in partnership with Orlando Shakes. She has performed extensively throughout the Southeast. Favorite Regional Theatre credits include Viola in Twelfth Night, Hedda in Hedda Gabler, Romeo in Romeo and Juliet, and Julia in Two Gentlemen of Verona. Born and raised in Atlanta, she currently resides in Alexandria with her husband Chris and their dog Penny.  www.mandilee.net (@mandileeacts) 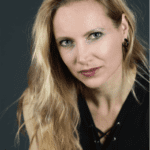 Marissa Molnar makes collaborative physical and multidisciplinary theater. She is thrilled to work with Synetic again for the first time since originating Helena in MIDSUMMER (2009) and the Nurse in ROMEO AND JULIET (2008). She has been a company member since 2012 with Broken Box Mime Theater, with whom she has created eight original shows. Marissa has performed with many regional theaters and toured nationally with Off-Broadway’s THE SCREWTAPE LETTERS. She recently taught physical theater in Peru, premiered her first film at the NY Indie Theatre Film Festival, directed for the Wet Paint New Play Festival, and debuted her multidisciplinary company, Moving Image Lab. She is based in NYC. B.A. Music: American University; M.F.A. Performance and Interactive Media Arts (PIMA): Brooklyn College.